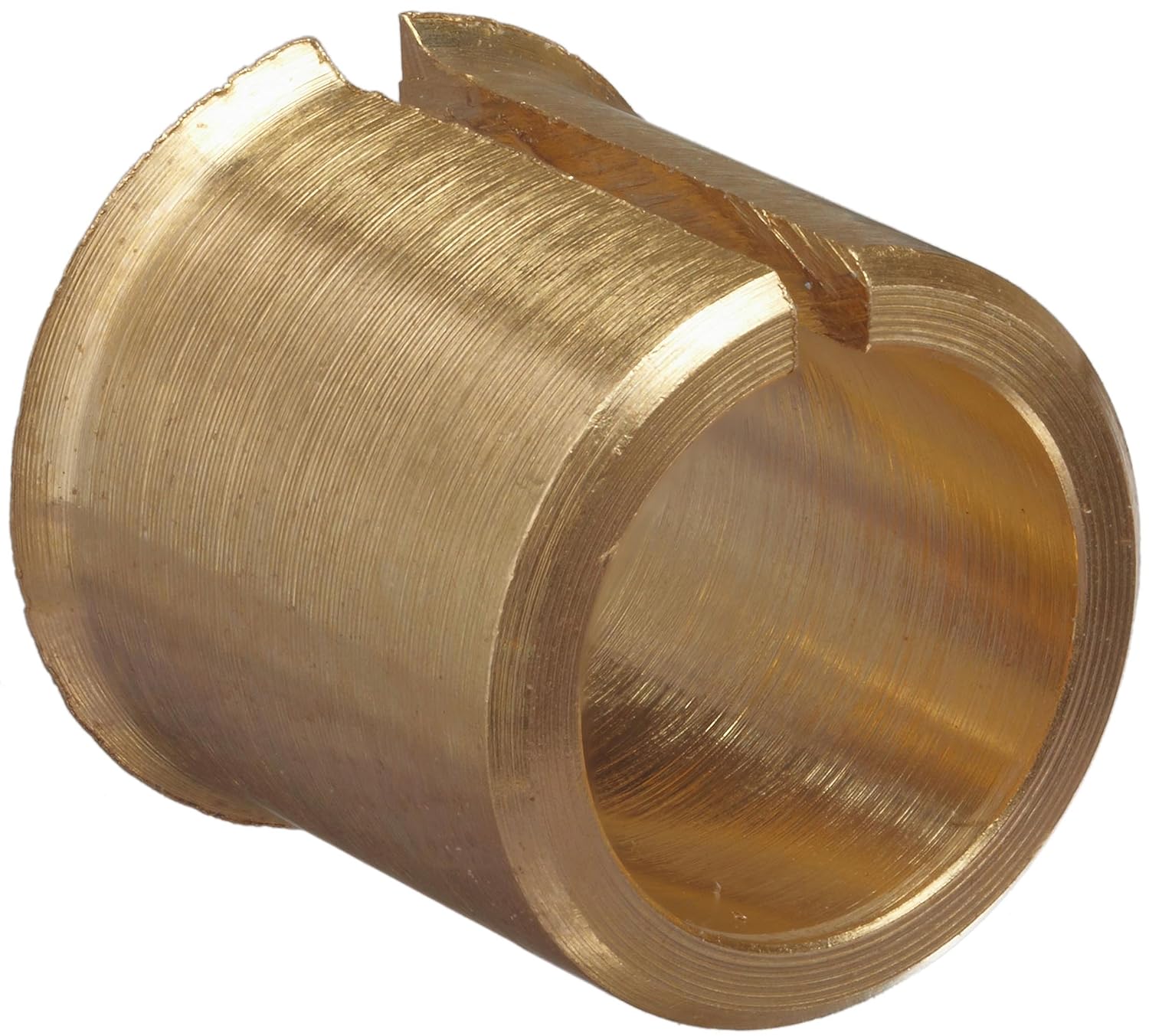 This Huco Huco-Lok bore reducer is for use with various Huco flexible couplings, such as the Huco-Flex B and Huco-Flex M model flexible couplings, and is made of brass for durability and resistance to corrosion. It narrows the bore of the coupling to accommodate a narrower shaft and has a feathered head for preventing over-insertion into the bore. The couplings that this bore reducer fits are for use in various industrial power transmission applications such as high speed dynamometers, high-end servo drives, metering valves, positioning slides, pulse generators, scanners, unsupported drive shafts.

Flexible couplings are used to link two rotating shafts that are not aligned in order to transmit the rotational power, known as torque, from one shaft to the other. Most flexible couplings consist of two hubs and a middle assembly; each hub attaches to a shaft while the middle assembly flexes between the hubs to accommodate the misalignment of the two shafts. Shaft misalignments are generally either parallel or angular and cause complications to transmitting rotational power from one shaft to another in the form of stresses, loads, vibrations, and other forces, which vary from one type of misalignment to another. Flexible couplings are used in a broad range of applications, such as in motor vehicles, conveyors, escalators, agricultural, forestry and mining equipment, aeronautics, robotics and space exploration, among others.

Huco Dynatork manufactures couplings, piston air motors, brakes, clutches, gear boxes and other transmission products. The company, founded in 1965, meets the quality assurance standards of the British Standards Institution (BSI), the International Organization for Standardization (ISO) and the Deutsches Institut fÃ¼r Normung (DIN), and is based in Hertfordshire, England.

(PMJ) is a peer-reviewed journal that supports the continuing development of junior doctors and their teachers.

PMJ is a peer reviewed journal published by BMJ on behalf of the Fellowship of Postgraduate Medicine. PMJ publishes papers that focus on core competencies; describe current practice and new developments in all branches of medicine; describe relevance and impact of translational research on clinical practice; provide background relevant to examinations; as well as papers on medical education and medical education research.

PMJ supports CPD by providing the opportunity for doctors to publish many types of articles including original clinical research, reviews; quality improvement reports, editorials and correspondence on clinical matters.

PMJ accepts submissions of a wide range of article types, including original research and reviews.

The Author Information section provides specific article requirements to help you turn your research into an article suitable for PMJ.

Information is also provided on editorial policies and open access.

Impact of removal of points for additional educational achievements: a student’s perspective on the recent UK Foundation Programme Office (UKFPO) Statement for 2023 Entry

Clinicopathological and prognostic values of PD-L1 expression in oesophageal squamous cell carcinoma: a meta-analysis of 31 studies with 5368 patients

Acute febrile illness with choreoathetosis: a rare presentation of brucellosis

COVID-19: Current understanding of its Pathophysiology, Clinical presentation and Treatment

Do we need the word ‘woman’ in healthcare?

Recalibrating our efforts: from globalisation to glocalisation of medical education

Winston churchill and his illnesses

Efficacy of ultrasound guidance for lumbar punctures: a systematic review and meta-analysis of randomised controlled trials

Professor Alan Smyth, along with hundreds of journals globally, is calling on world leaders to take action on climate change at #COP26.

Human health is inextricably linked to the health of the planet, says @seyeabimbola of @GlobalHealthBMJ.

What is the greatest threat to global public health?

Educational opportunities for postgraduate medical trainees during the COVID-19 pandemic: deriving value from old, new and emerging ways of learning

BLANKETS: a toasty tool to improve social history documentation for our older patients

Knowledge and practice of home blood pressure monitoring 6 months after the risk and assessment management programme: does health literacy matter?

Surgical training fit for the future: the need for a change